Where did the bodies go? Christos and the other survivors asked. But the Little People, who used hand signs and whistling noises instead of spoken word, gave no answers.

After they dragged from the wreck those who had died, the Little People guided the survivors to a village. Each was provided a hut with a cross-hatched reed bed, fruit, and pieces of cubed meat they thought was perhaps boar. It was briny and pale and had a distinct taste that some described as “gamey.”

Christos, already gaunt from his treatment, ignored the odd flavor. The protein fueled his body with energy and life. Those who refused the meat weakened and eventually perished.

The survivors had their suspicions. Around the village, they’d see an arm bone here, a femur there. As the months passed, the group became less.

David, the pilot, figured it out. While wandering the village outskirts one night, he happened upon a larger hut fortified with branches and dried elephant-ear leaves. The door was open. Steam poured out, accompanied by a distinct smell that reminded him of the cubed meat. Little People were busy stirring a large pot. A skull and rib cage buoyed at the top. One gnawed on a severed arm in the corner. Another feasted on the quad muscle. David said it belonged to a passenger. He knew this because the leg was still attached to the rest of her body.

David gasped, and the Little People looked out the door to him. They grinned with slick red lips and gave a black stare with vacant eyes. They returned to their feast, continuing to smile as they consumed. They nipped at first. But then they quickened their pace, faster and faster, until their small teeth flashed in a flurry of white and red like piranhas on rainworms or snakeskins. The woman’s leg was gone in seconds. She was gone soon after that.

The morning after David’s discovery, the survivors found themselves shackled within their respective huts. Later that evening, David stopped answering whispers and code taps from the other group members. The Little People served only small slices of fruit for a few days, not enough to quell hunger pains, and then the cubed meat showed up again. The last thing David said to Christos was, “I wish we could serve them rotten boar flesh.”

Before the crash, Christos was heading to Japan to receive a new treatment for his final stage of cancer. It was a last-ditch effort, unlikely to succeed. But the doctors told him it was for research and they offered a handsome payment that would provide for his family many years after he was gone.

He was prescribed pills to take each day in preparation. In a more euphemistic, bedside-mannerly way only good doctors speak, they said the capsules would slowly kill him. It would also partially kill the cancer, and then, in its depleted condition, they could hit it with an experimental treatment.

He stashed the pills in his hut when he was first taken to the village, along with his other belongings.

One by one, in an orderly fashion from hut to hut, survivors stopped answering each other’s wellness calls and were never seen again. When Christos’s neighbor went silent, he knew it was time. He spread the word during their daily escort to the latrine: “For the next week, don’t eat the meat.” Back in his hut, he tapped out the message in code a final time. He retired for the evening and downed his remaining pills, about thirty in all.

Then he went to sleep.

He dreamed of Little People clutching their throats and stumbling to the ground with their red grins turned upside down. He dreamed of the survivors breaking their shackles, tiny heads being smacked with stones, screams, and fires. He dreamed of the group sailing in a makeshift boat almost too small to stay afloat. He felt the rock of lapping waves and the chap of crisp, salty air. He saw fish flash their bright tails under a tropic sun, and then birds, and then land again.

Christos woke with tubes plugging his nose and running up under bedsheets into his arms. Acoustic ceiling tiles stared down at him. Antiseptic smell filled his nostrils when he moved his head. Machines whirred. He was accompanied only by a photo of his family and a vase of flowers. He felt safe, but something was missing. He reached for his legs but found stubs wrapped in cloth instead.

He squeezed the cloth and felt something hard. Between his thumb and forefinger, he pulled from under the sheets a triangular incisor with bits of flesh attached to the serrations.

The antiseptic odor was soon overcome by the gamey smell. His meat. His companions’ meat. He touched his stumps again and the smell intensified. His mouth watered.

Then shuffling footsteps in the hallway, and a tiny voice: “Mommy, will Daddy be okay?”

Christos glanced at his family photo. He grinned and stared at it. He began to drool.

The approaching noises snapped him from the daze. He yanked the cloth from his stumps and threw the bloody mess to the side. His glutes and back wetted as fluids pumped and pooled on the plastic-covered mattress. The patient monitor sounded when the blood-pressure graph plummeted.

The footsteps became louder. He heard his wife’s voice but could not make out her words over the beeping, increasing in frequency and pitch.

The footsteps neared. His drool intensified.

Christos pulled the tubes from his nose. The oxygen-saturation sensor flatlined, and a steady alarm resonated. With his remaining strength, he coiled the tubes and wires around his hands and yanked. The machine lurched forward on its wheels, unplugged from the wall, and rolled to a silence.

He became lightheaded. His vision blurred. 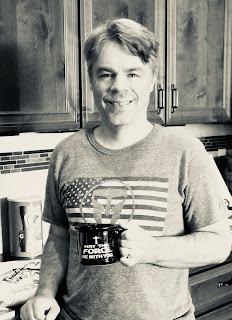 Michael Carter is a writer from the Western United States. He’s also a Space Camp alum, volcanic-eruption survivor, and wannabe full-time RVer. When he’s not writing, he enjoys fly fishing and wandering remote wilderness areas of the Northern Rocky Mountains. He can be found online at www.michaelcarter.ink and @mcmichaelcarter.