LOVE LIKE BLEEDING OUT WITH AN EMPTY GUN IN YOUR HAND by Stephen J. Golds

Cole had finally stopped crying. He sniveled and moaned. I sniveled a little too. Fucking hard to breathe. He shuffled along hunched shouldered beside me. I tried to get him to look back at me. He didn’t and I gave up. I focused on the dried, crusty blood caked around his left ear and the collar of his T-shirt, looked away. Poor prick. I never should have gotten him involved. He’d said it was a mistake. I hoped they’d do me first. I didn’t want to watch Cole beg and plead for his life.

The sounds of a bird singing somewhere and our feet scraping along the dirt track were ear piercing. Like wearing those large earphones. Plugged into nature. I checked the time on my wristwatch, then remembered that the prick who had broken my nose and duct-taped my wrists together had taken it. It was a fake Rolex I’d bought from a market in Hong Kong anyway so fuck that guy.

They walked us down a dirt track through an orchard. Small dwarfed trees with the deepest green leaves clustered together as far as I could see. No fruit on the branches. An orange grove, maybe. I like to think it was. Worse places to die than an orange grove. The colors of everything appeared a shade brighter, even the dust kicked up by the two guys carrying spades in front drifted a beautiful rich texture of golden brown. The sky the most radiant blue I’d ever seen it. Clarity. As though seeing through the eyes of a newborn baby. It’s true what they say, you only realize how beautiful life is when you’re dying. And that’s what me and Cole were doing there, in that orchard, dying. Always imagined I’d die on a rainy gray street in New Jersey. I was wrong. Wrong about many things.

Cole broke away, tried to run, stumbled, and fell to his knees. Let out a large ripping wail that sent a roost of pigeons flapping and cooing out of the trees, into the afternoon heat. The startled snapping of wings shotgun blasts in the calm stillness.

One of the guys behind, one from the poker game, kicked Cole hard in the side of his skinny back. Bones snapped. The one who stole my knock-off time piece chuckled and flicked a cigarette into a yellow patch of weeds. Waved the shotgun in his hand like he was signing his name in the air. Cole got up slow, wheezing and foaming at the mouth, a dog locked in a hot car, spat blood onto the grit and sniffed. The blood was so damn red. Mumbled that he didn’t want to die. He sounded like a child sat on the stairs refusing to go to bed. We were already dead. I wanted to say that to him but didn’t. Just tried to swallow the dry lump in my throat and looked back into the dense greens and browns of the orchard.

I attempted to get my thoughts in order. Difficult as hell. Jumbled. Scenes and moments flashing through my mind like standing on a commuter train staring out the window catching snatches of people’s faces as they waited at passing stations.

An unhappy childhood came and went.

Then finally, my mind settled on something.

There she was. There with me in that orchard. I hadn’t thought about her for weeks. Not since I threw her out of my apartment that Saturday afternoon. Then I’m there. Seated on the couch smoking a cigarette and her standing in the kitchenette shouting at me. Wearing the Boston Celtics jersey picked up from the bedroom floor that morning. Long black hair wild. Last night’s maroon lipstick smudged around that sexy, pissed off mouth of hers. The final one. The last argument. About money, like everything else in life. Fucking money. Either you’ve got too much, or you’ve got too little. Or you knock over a protected poker game for a few thousand bucks, find yourself in an orchard in Buttfuck, Nowhere walking toward a hole dug in the earth especially for you because people died when they weren’t supposed to.

Clarissa. I should have asked her to marry me. Shoulda, woulda, coulda. By the time I realised I needed her back she had a new man already. A fucking week later. Felt pretty shitty I was so easily replaceable, but she wasn’t getting any younger. Women are like that. I read somewhere that women instigate seventy five percent of breakups. Men, we get a bad rep, but we are the ones left crying into our beer, alone in dive bars while the women have made us an unwelcome memory. Not love. Monkey branching, I heard that’s called.

Love? Love like bleeding out with an empty gun in your hand. Love like a hole in the dirt. Love like a bullet in the back. Who needs fucking love?

Clarissa. The best fuck I ever had. We argued every other day but had something special there too. Compatibility. That rare, crazy kind of passion. At least, I had thought so. Maybe I was wrong about that too. Should have married that girl. Love like a bullet in the eye, through the brain and then gone. Maybe that was the kind of shit that Cole was thinking over that got him bawling. Maybe I started to cry a little too. I didn’t want to die. Not like that. She’d never even know what happened to me. I’d be forgotten. Like I never happened at all. A skeleton that a farmer found in sixty years time when everyone I had loved were already obituaries.

The orchard and dirt track tapered off into some woodland and the sight of the dusty hole hacked into the ground hit me like a shovel blade to the guts. Violently shoved forward toward the mouth of nothingness. The hole. My legs felt full of hot water. I glanced down, realizing I’d pissed myself. I heard someone screaming. I looked over at Cole, he stared back at me. His mouth unmoving. Eyes too wide and too white. His head snapped forward, taking my breath away. A fine mist like maroon ocean spray danced onto the air between us. His eyes were very white and very wide. Someone still screaming somewhere. Yelling a name out into the empty, beautiful afternoon: 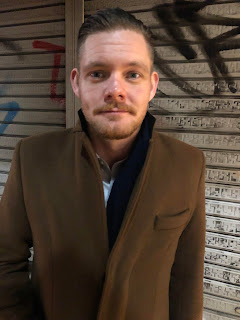 Stephen J. Golds was born in London, U.K, but has lived in Japan for most of his adult life. He enjoys spending time with his daughters, reading books, traveling, boxing and listening to old Soul LPs. His novel, Say Goodbye When I’m Gone will be released by Red Dog Press in October 2020 and another novel, Glamour Girl Gone will be released by Close to The Bone Press January 2021.
Posted by AC at 6:28 PM